CST Studio Suite technology comprises a wide range of solvers, enabling the simulation of complex devices and the development of new technologies.

Often these complex devices are difficult to understand and it’s not easy to have analytic estimations, especially when they involve particles and the behavior is transient. Simulation is able to mimic the complex electron/wave interaction, responsible for a power generation/amplification process. The prediction of performance by means of simulation is a key task throughout the design.

CST Studio Suite includes several tools for designing charged particle devices, including the Particle Tracking Solver, the electrostatic (es-PIC) and the standard Particle-in-Cell (PIC) Solver and the Wakefield Solver. These can be used to design beamline components from particle sources, to magnets, to cavities, to absorbers.

Particle dynamics simulation is also crucial in the design of vacuum electronics devices. Magnetrons, gyrotrons, klystrons and traveling wave tube amplifiers are among the components that can be designed with CST Studio Suite. Breakdown effects such as multipaction and corona effects can be simulated and, with multiphysics simulation, the thermal and mechanical effects of high-power microwaves can also be taken into account.

There are several types of accelerators around the world such as Linear Accelerators, so-called LINACs, Synchrotrons to provide an energetic source of photons for material characterization, irradiation, biology and colliders constituted of rings where particles collapse and generate new energetic particles usually present in space and synthesized in laboratory for fundamental research and Universe understanding.

Accelerator components such as cavities or beam position monitors are typically designed with the Eigenmode, Transient or Frequency Domain solvers. However, when it comes to the interaction with the beam, the Wakefield solver is an incredibly versatile tool (read more about CST Studio Suite solvers here).

We consider the 9-cell cavity of the TESLA accelerator shown here. The goal is to maintain the electron beam acceleration during the whole propagation of the beam along the accelerator. RF-power is generated and coupled in to the TESLA cavities to establish these EM-Field in the cavities. The electrons passing through the cavities need to keep the right phase relation to the field in order to maintain acceleration. The electron beam, a strong current by itself, however induces high frequency fields and excites modes, the so-called wakefields, while traveling through the cavities that could limit or interrupt the acceleration process. The Wakefield solver computes these fields and helps to improve the design of the accelerator components.

Vacuum Electron Devices such as Traveling Wave Tubes (TWT) are used mainly for satellite communication because of their reliability, but also thanks to their performances. For instance, in the frequency range between 1-60 GHz, the amplified signal can reach an output power up to 500W with an efficiency over 50% (for space TWTs).

In contrast to their solid state counterparts, they show higher efficiency, higher reliability, better thermal performance and a slightly better linearity. However, they are more expensive to build. Thus, TWTs are used when reliability is a must, such as for high powers and on satellites. Simulation is very attractive in these design processes as it reduces the need for multiple costly prototypes.

The design of a TWT can be completely performed using the PIC solver to characterize the Slow Wave Structure (SWS) which corresponds to the interaction region between the electron beam and the RF-signal sustained by the helical structure.

Plasma applications typically have large time scales and the plasma can be described by its space charge interaction between the electrons and the ions. The Electrostatic Particle-In-Cell (ES-PIC) technology computes space charge versus time, taking into account the electrostatic effect only. This means that compared to a pure PIC approach, there is no current and H-Field induced but it is very well suited for these plasma applications. It also stays valid for plasma applications where the phenomenon can be described by the space charge dynamics and collisions at relatively low pressure, neglecting the temperature gradients of the ions and the convection effects which would require another numerical approach.

Plasmas for fusion are very hot plasmas. They are created in tokamaks and provide a new source of energy production. This is one of the sustainable energy under investigation today to answer the energetic problems the world is facing. The energy of the future must come from clean, safe and controlled fusion.

Gyrotrons are high power vacuum electron devices capable of generating output powers in the order of hundreds of kW with operating frequencies up to several hundreds of GHz. Gyrotrons are very well suited for plasma heating process because the microwave frequency generated can excite one of the plasma frequencies. The waves transfer their energy to the plasma leading to the heating process.

A very special feature in SIMULIA is RF-Breakdown analysis such as Multipactor and Corona effects.

For instance, let’s think about a rocket launch, where you of course need to have some electronics active to communicate with the vehicle and safely get the payload into orbit.

The question is what happens to the RF-components that are used for the onboard communication as it goes through the different levels of pressure during the launching process. This is important because you do NOT want to lose such mission due to possible RF-breakdown on critical RF-components.

Two ways of investigation can be performed here. When working at relatively low pressures, The Corona effect is dominant whereas for components embedded in space (which means very close to vacuum), the Multipactor effect is dominant. The multipactor is governed by the material properties and the so-called Secondary Emission Yield which controls the probability of emitting more than one electron from the impact of a primary electron on the RF-component surface. When the power of the RF-device is strong enough so that the local EM-Field can accelerate some electrons leading to a multiplication of secondary electron emission, creating an avalanche of electrons, multipactor occurs.

Multipactor and Corona effects are strong constraints which have to be taken into account during the design phase of the RF-components and the qualification tests. 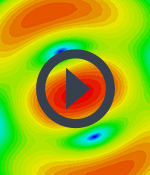 SIMULIA develops simulation technology that  can be used to calculate electromagnetic fields in a wide range of application areas. These technologies are particularly useful for Particle Dynamics simulation. Depending on your working environment this technology is available to you in various ways: 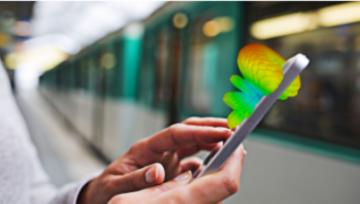 Electromagnetics on the 3DEXPERIENCE Platform

EM simulation software is a game changer when it comes to reducing the time and cost of bringing a product to market, not just in the high-tech industries of electronics and communication.

Opera Simulation Software is a Finite Element Analysis software suite which, with its strength in low frequency simulation, is extremely useful for the design of magnets, electric motors and other electrical machines.

Spark3D is a unique simulation tool for determining the RF breakdown power level in a wide variety of passive devices, including cavities, waveguides, microstrip and antennas. 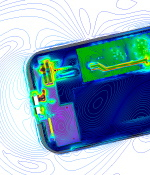 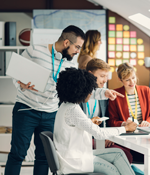 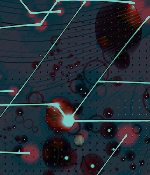