The mission of the BIOVIA Science Council is to enhance the scientific excellence and build the prestige of BIOVIA’s scientists, software and services by guiding the direction of company-wide applied science innovation, in alignment with the company strategy. The Council, made up of leading BIOVIA scientists, ensures our scientific excellence and leadership for all chemical, material and biology based industries by covering applied science innovation and strategy, from discovery to commercial production. A large amount of BIOVIA publications can be found on Google Scholar.

Do you have questions for the BIOVIA Science Council? Feel free to contact us.

Hugues-Olivier Bertrand, Ph.D., joined BIOVIA in 1998 as an application scientist. Currently, as a senior director and senior fellow, Bertrand manages the Life Science Research Pre-Sales group and his main areas of expertise include protein modeling, simulations of macrolecules, virtual screening and structure based drug design. He received his doctorate in pharmaceutical sciences from University of Rennes, France. He followed his academic curriculum with a postdoctoral experience focusing his research work on computational structural biology at the Institut de Biologie Physicochimique and Institut Gustave Roussy in Paris. After joining BIOVIA, Bertrand started developing structural biology and drug discovery projects on Family 3 GPCRs activated by amino acids. This work, carried out in collaboration with other experts, gave rise to several publications, patents, international seminars and doctoral thesis. Bertrand teaches computational chemistry, comparative modeling and virtual screening at Institut Gustave Roussy and has co-supervised several doctoral theses. He is the author of 50 publications in peer-reviewed journals.

Anne Goupil-Lamy, Ph.D., principal field application scientist and Science Council Fellow at BIOVIA, obtained her doctorate in molecular biophysics from the University of Pierre and Marie Curie (Paris VI, France). She studied protein dynamics and denaturation using molecular dynamic simulations and neutron scattering experiments under the supervision of Professor Jeremy C. Smith. Goupil-Lamy joined MSI (now BIOVIA) in 1998 as a support scientist and gained expertise in the many modelling areas supported by BIOVIA' life science modelling tools. While managing BIOVIA' contract research group for many years in Europe and worldwide, she performed feasibility studies, developed proposals and was involved in the delivery of structure-based design and ligand-based design projects with one contract resulting in a patent. As a pre-sales scientist, she has performed several validation studies in fragment-based design and protein-protein interactions that were presented at conferences and to customers. She is also involved in biotherapeutics projects focusing on antibody design.

Senior Director of the Quantum Mechanics and Nanotechnology R&D Team

Victor Milman, Ph.D., joined BIOVIA in 1994 and currently serves as a senior fellow and manager of quantum mechanics and nanotechnology research and development team. He graduated from Moscow Institute of Physics and Technology and received his doctorate in solid state physics from The Ukrainian Academy of Sciences. His subsequent research at the Institute of Metal Physics in Kiev focused on development of first principles techniques for study of lattice properties of inorganic crystals. This work continued at the Cavendish Laboratory, Cambridge, where he was employed as a Research Associate for the SERC Collaborative Computational Project in electronic structure of solids. This activity in the group of Professor Heine and Professor Payne culminated in the public release of CASTEP, a revolutionary code for quantum-mechanical modelling of solids and surfaces. Milman further worked for a year as a visiting research fellow at the DOE Oak Ridge National Laboratory, concentrating on applications of CASTEP to physics of semiconductors, from modelling growth processes to study of extended defects. Victor Milman has 150 peer-reviewed publications with the h-index of 29, which reflects both productivity and high scientific impact of his research. His contributions include numerous conference presentations, co-supervision of doctorate students with University of Cambridge and with University College London, organization of meetings and symposia, regular refereeing of papers for the major journals in physics and chemistry.

Lalitha Subramanian, Ph.D., Senior Director of Global Contract Research, currently serves as a Science Council Fellow at Dassault Systemes. With a Ph. D. in Chemistry from the Indian Institute of Technology, Madras, India and postdoc at Cornell University, New York, USA with Prof. Roald Hoffmann (Nobel Laureate), Lalitha combines her hands-on knowledge of wet-lab chemical synthesis and sophisticated materials characterization with computational science and data science.  She leads a multidisciplinary team of scientists and engineers and has successfully delivered industry customers with drug and biologics R&D solution, product and process optimization focused on achieving their sustainability goals, battery and fuel cell design and innovation and much more. With her scientific guidance the Contract Research team has won innovation awards from industry customers and resulted in a joint patent with one of them.  In addition to applied research, her other scientific contributions include book and book chapters, peer-reviewed publications, invited presentations at international conferences and patents.

Marc Meunier, Ph.D., principal field application scientist and Science Council Fellow at BIOVIA, holds a master's from Pierre and Marie Curie University (Fr) and received a doctorate in chemistry from Bangor University (UK). After completing his doctorate he worked as a postdoctoral research fellow at Imperial College, London. He joined BIOVIA in 2000 as a product specialist for materials modelling. Meunier's research interests include the study of nanodielectrics, the simulation of polymeric materials used in membrane technology, pharmaceutical materials science and more recently the growing field of materials informatics. He is on the editorial board of the journal Molecular Simulation; his publications appear in Chemical Physics, Applied Physics and Polymer journals; and he has recently edited a book entitled "Industrial Applications of Molecular Simulations."

Johan Carlsson, Ph.D., senior field application scientist and Science Council Fellow at BIOVIA, received his master's in engineering physics from Chalmers University of Technology, Gothenburg, Sweden and a doctorate in physics from the University of Gothenburg. His research centered around electronic structure calculations for surfaces and interfaces in metals and metal oxides with a particular focus on grain boundaries. He subsequently headed the Nanoporous Carbon group in the theory department of Fritz-Haber-Institut der Max-Planck-Gesellschaft in Berlin for six years. This research group used electronic structure calculations to investigate the catalytic properties of carbon-based materials such as graphene, carbon nanotubes and nanoporous carbon. In 2008, Carlsson joined the Contract Research group at BIOVIA where he worked on customer projects including carbon nanotube polymer composites, morphology of crystallites and metal oxide catalysts. One of these projects resulted in a joint publication in the Journal of Physical Chemistry C. As a senior field application scientist at BIOVIA, he helps customers solve their scientific problems using modelling and simulation techniques. Carlsson has published 18 scientific articles and one book chapter. Three of these articles have received more than 100 citations. He is regularly asked to referee manuscripts in peer-reviewed journals and invited to speak at conferences.

Michael Diedenhofen, Ph.D., R&D Scientific Developer and Science Council Fellow at BIOVIA, began his career with an apprenticeship as a chemical laboratory technician. He then went on to study chemistry at the University of Duisburg and continued at University of Marburg, Germany, earning his Ph.D. in Chemistry in 2000. During his thesis work in the group of Prof. Gernot Frenking, he was studying transition metal catalyzed reactions by quantum chemical methods. After completing his Ph.D., Michael accepted a position as computational chemist at COSMOlogic, which was later acquired by Dassault Systèmes. Michael is a member of the BIOVIA Solvation Chemistry group. His work focuses on modeling properties of molecules in solutions, including the development of COSMO and COSMO-RS models. These models have a wide range of applications for research and customer projects, such as: ionic liquids, environmentally relevant data, materials science, life-sciences, and more. Michael has published more than 30 peer-reviewed papers.

Felix has a Ph.D. in statistical physics followed by two postdocs in developing materials science modeling software applied to nanoscale systems. Since joining BIOVIA in 2012, Felix has worked on developing BIOVIA Materials Studio in the Quantum Mechanics group, specifically quantum mechanical simulation software and chemical reaction prediction workflows. He has driven R&D efforts for the modeling and simulation of battery components and multiscale modelling initiatives with our sister brands at Dassault Systèmes. Felix has published more than 30 peer-reviewed papers. 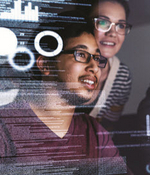 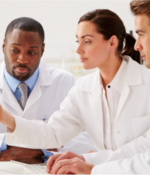 Have a question for the BIOVIA Science Council? Feel free to contact us below.