Dymola 2023 is the latest release version. It can be downloaded by registered users from the support center. 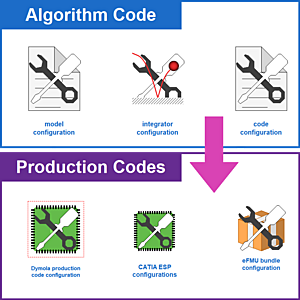 Simulation Analysis in Dymola 2023 has been extended with detailed timer statistics, helping to pinpoint any bottlenecks in your simulation. It offers two views, both detailing execution time in seconds as well as the number of calls. Hotspots are highlighted in red. The first view groups the simulation code into logical sections. The second view shows individual function calls, and if FMUs are included in the model, it will show the distribution for each FMI-function.

Dymola supports eFMI according to the latest publicly available specification. Dymola’s eFMI facilities comprise generation of eFMUs with Algorithm Code, Production Code and Binary Code containers and supports the usage of generated eFMUs for co-simulation from within Modelica models. A Dymola Source Code Export license is required to work with eFMI.

Dymola 2023 has support for both import and export in the SSP format (System Structure and Parameterization). SSP export will create an SSP file with embedded FMUs for any component models. For Modelica models, the system description that contain references to the Modelica model. Meta data defined in the Modelica model will be exported as an annotation.

The Dymola license server is upgraded to version 11.16.2.1 of FLEXNet Publisher. This update enables you to work on for example (for Windows) Windows Server 2019 and works with previous Dymola versions as well. The 32-bit license server on Windows is replaced with a 64-bit version.