To design, build and fly around the world in a solar-powered plane and demonstrate what is possible using alternative energy sources.

Changing the world with solar energy

Running out of gas can be a frustrating experience. But it can lead to other things. When Bertrand Piccard made the first non-stop around-the-world balloon flight in 1999, he took off with 3.7 tons of liquid propane; he landed 20 days later with only 40 kilos left. “That was close,” Piccard said. “I was constantly afraid of running out of gas. It was so stressful that I promised myself that the next time I fly around the world it will be without any fuel.” This was the beginning of the Solar Impulse adventure.

Piccard comes from a long line of pioneers. His grandfather, Auguste Piccard, designed a balloon with an airtight, pressurized cabin and became the first person to reach the stratosphere. His father, Jacques Piccard, made a recordbreaking descent to the floor of the Marianas Trench in the Pacific Ocean, the deepest part of the earth’s oceans. Through them, he met many explorers, pioneers and astronauts,
including Neil Armstrong and Charles Lindberg, who became his role models and awakened his own pioneering spirit. “As a child, their exploits amazed me,” he said. “Our family had lots to talk about at the dinner table.”

Without Dassault Systèmes we could never design a plane that is so revolutionary.

Bertrand Piccard and Solar Impulse CEO and co-founder André Borscherg, who are friends, will attempt to fly around the world in 2015 in the Solar Impulse 2, a plane powered entirely by the sun’s energy. Why Solar Impulse 2? “Because Solar Impulse 1, the first solar airplane we built, was more of a prototype, a flying laboratory used for testing in different flight situations and weather conditions,” Borschberg said. “The second plane is designed for long-distance travel, reduced energy consumption and improved performance. This is the Solar Impulse 2.”

When Piccard presented his idea for an around-the-world solar-powered flight, “I told him I needed 24 hours to think about it, but I knew I was going to say yes,” Borschberg said. A former Swiss air force pilot, who trained as an engineer and a graduate of MIT’s prestigious Sloan School of Management, Borschberg holds professional airplane and helicopter pilot licenses. He also brings more than 20 years of business and entrepreneurial expertise to the project. As CEO, he manages the 50-strong technical team working on the plane and relies on his engineering and business skills to supervise construction and flight mission preparation.

The project’s founders chose Dassault Systèmes’ 3DEXPERIENCE platform to design their plane “because we believe they are simply the best technologies on the market,” Borschberg said. “Everything is new with this airplane. It’s a complex project. Normally when building a new airplane you use existing engines, if you want to test new engines you use existing airplanes. But here the propulsion is new. The energy is new. The structure is new. It’s all so incredibly complex. Our technical advisor told us we were crazy to rely only on 3D digital software instead of building a physical mock up. But we had confidence in these technologies.”

We chose Dassault Systèmes’ 3DEXPERIENCE® platform to design the plane because we believe they are simply the best technologies on the market. 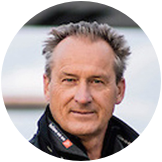 In addition to designing the plane with 3DEXPERIENCE applications, Solar Impulse engineers were also able to digitally test their designs in various configurations. “The 3DEXPERIENCE platform’s design and simulation applications were extremely helpful because they enabled us to develop our plane without using physical prototypes, which are too expensive and take too long to build,” Borschberg said. “We began by designing the individual parts and then assembling them using the 3DEXPERIENCE platform’s assembly features before proceeding with manufacture. We always said that if it didn’t work in CATIA, we were sure we’d run into problems later on. With CATIA we got it right the first time,” Jonas Schär, head of the design team, explained. The engineers also used the 3DEXPERIENCE platform’s composites and manufacturing capabilities, including defining and optimizing the plies of the plane’s carbon-fiber structure and machining the tools used to produce many of the carbon parts in-house.

The team faced many technical challenges along the way. Pilot safety and comfort are primary concerns as the pilots will be flying five days and nights at a stretch in a plane capable of climbing to 8,000 meters, where hypoxia could prove fatal. “We used 3DEXPERIENCE applications for optimal layout and ergonomics for the cockpit design,” Schär said. “The pilots trained long hours inside the cockpit sitting, moving, doing simple exercises, eating and sleeping. This enabled us to make the necessary adjustments so that André and Bertrand would be as safe and comfortable as possible.”

Another challenge is to keep the plane airborne for five days and nights at a stretch. “Its only source of energy is the sun, so to stay in the air, the plane must be able to run on very little energy and have a pretty long wingspan,” Borschberg explained. “The Solar Impulse 2 weighs 2,300 kg. It’s as light as a car, yet has a 72-meter wingspan, longer than that of a Boeing 747. Digital simulation helped us find the right span length/plane weight ratio for such a long flight.” Finally, the Solar Impulse team had to find the right components. These needed to be lighter and more resilient than what is normally available on the market. “When we started this project, we asked airplane manufacturers if they could build this plane and they simply said no, it’s not possible,” Borschberg said. “So we had to find new technologies and solutions, outside the world of aviation and then integrate them for the first time in an airplane. We had to design a completely revolutionary solar airplane from scratch. Without 3DEXPERIENCE, it simply would not have been possible,” Borschberg said.

Working with a 3D model helped engineers determine the space requirements for the cargo freighter used to transport the disassembled plane to its take-off site. “CATIA enabled us to make sure that we had enough room,” Schär said. “Space is tight in a freighter, so we conducted 3D simulations using the 3DEXPERIENCE applications to determine the best way to use the available space. We even used them to design the fixtures needed to package and ship the plane as well as the mobile installations for the ground support crew.”

Pushing back the limits of the impossible

Solar Impulse 2 completed its maiden flight in June 2014 and will embark on a series of test flights in preparation for its ultimate five-month, 35,000 kilometer around-the-world flight. Beyond the extraordinary adventure awaiting the two pilots in 2015, Solar Impulse is also their way of showing people that clean energies can change the world. That protecting the environment is not an impossible task; that it does not have to be boring or necessarily mean lowering living standards or reducing mobility. “We want to demonstrate that it is possible to use alternative energy sources to do great things,” Piccard said. “Exploration has the power to inspire people. In the 20th century, exploration was about conquering new territories. In the 21st century, it should be about improving the quality of life. This applies to renewable energies; clean technologies that can help us reduce our dependence on fossil fuels. Saving the environment and becoming pioneers in our own lives, in how we think and behave, is what Solar Impulse is all about.”