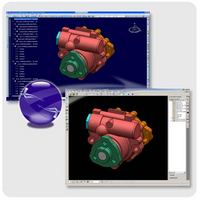 The V6 <> NX CADverter integrated within the V6 environment enables bi-directional file and PDM collaboration scenarios.  It can be used interactively or in batch mode depending upon a user's requirements.  As standard, this particular product has been designed specifically to be incorporated into process oriented operations and so is integrated and runs under the management of the V6 infrastructure.

The V6 converted data can then be used anywhere within the V6 environment, in all applications (CATIA, DELMIA, SIMULIA, ENOVIA) enabling supply chains with mixed V6 and NX environments the ability to collaborate more efficiently.

Theorem’s CADverter also provides the ability to convert NX into 3DXML files for collaboration with all applications collaborating through this format, such as CATIA, DELMIA, SIMULIA, ENOVIA, 3DVIA and 3DSWYM.