Vice chairman of the Board & Chief Executive Officer 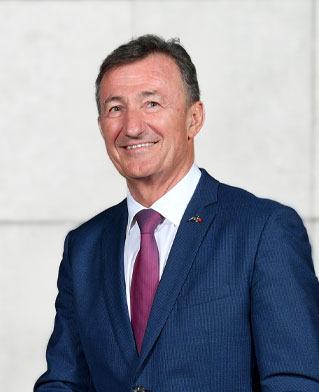 Bernard Charlès was appointed president and chief executive officer of Dassault Systèmes in September 1995 and Vice-Chairman of the Board of Directors in May 2016. Today, the Company, world leader in 3D software, is a global top-ten software company.

Charlès has helped instill a culture of ongoing innovation to further consolidate Dassault Systèmes’ scientific capabilities and make science part of the company’s DNA. He joined Dassault Systèmes in 1983 to develop new design technologies. In 1986 he founded a dedicated New Technologies, Research & Development, and Strategy department. In 1988 he was appointed president of Strategy, Research & Development, helping establish CATIA as the world’s number one product design software.

A firm believer that technology should contribute to progress in society, Charlès has positioned Dassault Systèmes as the preferred partner for innovation, empowering businesses with sustainable step-changes in competitive performance.

In 1989, he was part of the inspiration behind digital mock-up (DMU), allowing design engineers to produce full-blown 3D models of products. And in 1995, he initiated the DMU of the Boeing 777, the world’s first all-digital designed aircraft. In 1996, Charles orchestrated the flotation of Dassault Systèmes on the stock market, providing a strong and stable platform for growth. He had become member of the Board of Directors in 1993.

In 1997, he expanded and strengthened Dassault Systèmes’ commercial footprint with the acquisition of SolidWorks to serve businesses large and small. The Company also resumed control of its entire distribution network in 2010, which had previously been in the hands of IBM.

In 1999, Charles pioneered the concept of product lifecycle management (PLM), extending the concept of the digital mock-up(DMU) to the entire lifecycle of a product. To support the Company’s PLM strategy, he embarked on a series of key acquisitions and brand creation: ENOVIA in 1998, DELMIA in 2000 and SIMULIA in 2005.

These strategic developments reflect Charlès’ firm belief that 3D universes open up new frontiers in innovation, and that imagining sustainable innovations capable of harmonizing product, nature and life is the only way that business, science and society can co-exist in the future.

Bernard Charlès was born and grew up in Brittany, France. He and his wife have five children.