Students arriving at the University of British Columbia (UBC) near Vancouver might be drawn by the forested peninsula on which the campus sits, the university’s ranking as one of the 40 best in the world, or UBC’s commitment to entrepreneurial innovation. Now, more than 400 of these students will reside in a new residence hall that exemplifies how UBC challenges the status quo on behalf of transformative discovery.

The residence hall, known as Brock Commons - Tallwood House, demolishes the old paradigm that high-rise buildings must be made of steel and concrete, and constructed onsite. At 18-stories high, Tallwood House features the first North American use of mass-timber products in a residential highrise. Its sustainably harvested Canadian wood saves 2,432 metric tons of CO2 when compared to more traditional structural materials – the equivalent of taking 511 cars off the road for a year. What’s more, the building’s pioneering use of virtual design and construction (VDC) modeling and onsite assembly of manufactured parts, helped complete Tallwood House approximately 70% faster and at less cost than traditional concrete buildings of the same size.

“When we first started this company, we asked ourselves how we could find a really differentiated way to impact the construction industry,” said Javier Glatt, co-founder and CEO of CadMakers, the Vancouver-based VDC modeler for the project. “We’re using digital modeling and simulation to understand how a building is going to operate when you actually build it. By manufacturing a building as opposed to stick-building it, you can control tolerances much better, you can control risk much better, you can plan much better, and you can deliver more with less resources compared to a traditional concrete or steel building.”

CadMakers is an integrated construction and manufacturing technology company that solves problems and optimizes processes along the construction and manufacturing value chains. On the Brock Commons – Tallwood House project, CadMakers served as a virtual general contractor, working closely with all the stakeholders, including the designer Acton Ostry Architects, Inc., the construction management company Urban One Builders and the project management of UBC Properties Trust. Using Dassault Systèmes’ 3DEXPERIENCE® platform on the cloud, it created a 3D structural model and manufacturing simulations for Tallwood House that supported pioneering innovations in building materials, design collaboration and construction processes.

“Tallwood House was largely built in a plant and erected onsite very quickly,” Glatt said. “Prefabrication and process integration accelerated the project and reduced risk. If we can build this way, we can go much faster. We can save a lot of money that can be invested to deliver more value.”

If you can connect the design and construction in a fully integrated 3D model at an extreme level of definition early on, it brings everyone on the same page in terms of visualizing the project; you reduce the risk of coordination challenges and miscommunication. 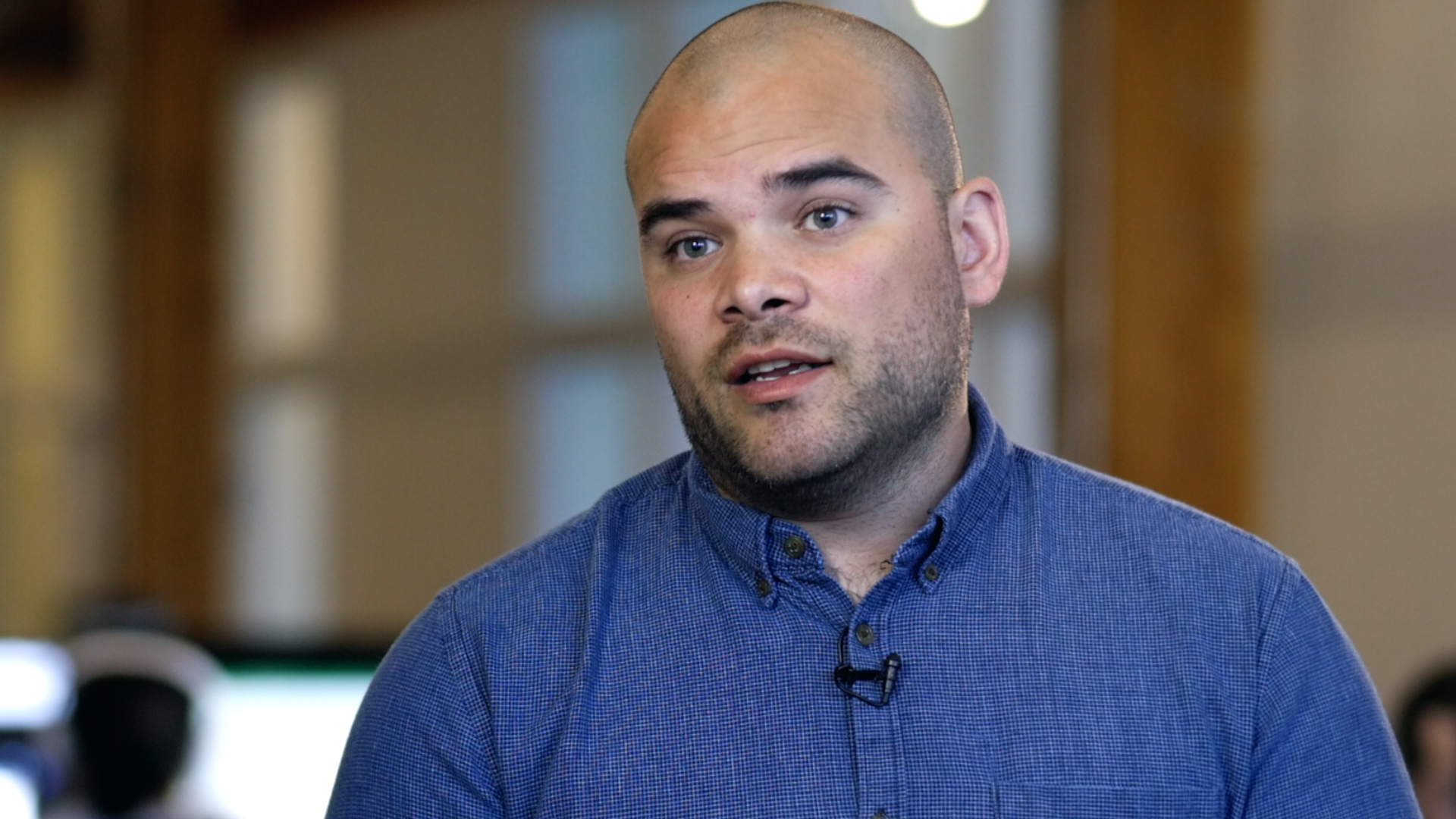 The virtual 3D model CadMakers created in Design for Fabrication’s CATIA application incorporated all the data from the various project contributors into a unified view, and allowed them to review the plan, in granular detail, in an immersive environment. In a typical project, the various teams involved – architects, structural engineers, mechanical engineers, geotechnical consultants, materials fabricators, plumbing and electrical construction teams – all use their own software. CadMakers brought all data together in one place on the 3DEXPERIENCE platform on the cloud, so it could be viewed anytime, anywhere by authorized users, and updated in real time in a controlled way. This solved the common construction industry problem of waste and conflict due to inconsistent information.

“If you can connect the design and construction in a fully integrated 3D model at an extreme level of definition early on, it brings everyone on the same page in terms of visualizing the project; you reduce the risk of coordination challenges and miscommunication,” Glatt said. “As a result, everyone worked together on Tallwood House. There’s much more value in collaboration than in the adversarial way that often happens in construction projects.”

The additional value of working on the cloud was an integral factor. “The cloud helps with our workflow and managing our time and resources,” Justin Khabra, project modeling designer at CadMakers, added. “If I’m really tied up, a colleague of mine who’s in a different city or country can take over to work on something and then pass it back to me, which allows us to get things done on time. We also can have three people working on the same project simultaneously, and then the project gets done three times faster.”

A virtual 3D model of Brock Commons – Tallwood House incorporated all the data from the various project contributors into a unified view and allowed them to review the plan, in granular detail, in an immersive environment.

Accurate to a tenth of a millimeter, the CATIA model helped place and size building penetrations to accommodate pipes, shafts and cabling, while ensuring that clearance and spatial requirements were met. It also drove data to the digital fabricators manufacturing building components offsite. The mass-timber framing of Tallwood House used cross-laminated timber (CLT) panels and glued laminated timber, or glulam. The strength of these products, as glulam is stronger than steel, lets builders exceed the traditional six-story limit on wood construction. The data went directly to factory computer numerical controlled (CNC) routers that precision-drilled the timber. By the time it reached the building site, the wood was ready for assembly and cut so that all the penetration spaces lined up precisely for tradespeople such as plumbers to do their work.

“The software allowed us to model in 3D and have a look at everything to confirm all of the specifications and exactly where everything goes,” Karla Fraser, senior project manager for Urban One Builders. “From the very top of the building, all our plumbing stacks line up within millimeters of precision of the installation and everything is exactly where it’s supposed to be. There’s been no additional work onsite as a result. It’s a huge savings of effort.”

In addition to creating the virtual model of Tallwood House, CadMakers used DELMIA’s Optimized Planning on the cloud to simulate the construction project production environment in the dimension of time. This allowed project managers to identify issues in 3D that would have been much more time- and cost-intensive to discover and resolve onsite. For example, the project team tested scenarios for keeping other building-trade teams on pace with the wood installers, since wood cannot remain exposed to the elements for long. They also discovered that if the staircase installation hit delays, the rest of the project timeline would unravel.

“Originally we didn’t think the staircase would be our critical path, but it became abundantly clear as we developed the model,” said Fraser of Urban One Builders. “If we didn’t manage to get our staircase in time, we would fail to manage the overall schedule. Without simulation, that’s something we would have learned onsite. It would have been cumbersome to figure out how to make it work.”

It also would have been expensive. Just maintaining a construction site costs approximately $140,000 a month, not counting the interest on construction financing, Glatt said. Having everyone wait around for a dependency-related problem to be solved can throw schedules and budgets out of whack. Simulating ahead of time on a computer is far more efficient; instead of stopping work onsite, you simply optimize the virtual scenarios.

Khabra did exactly that with 4D clash detection for the Tallwood House project. A clash can happen in geometric space – two building elements intersecting improperly. Or, it can be a workflow clash, such as plumbers showing up before the pipes get delivered. CadMakers figured it out virtually before they became problems onsite.

“We’re breaking down the traditional construction processes into a more scientific manufacturing process,” Khabra said. “The great thing about these simulations is the underlying physics. We can show how machinery will move through space, where things will be located in reference to one another, how fast a crane can move, the load capacity of trucks. I know the limits of the equipment or resources in real life before going out on the job. What’s more, you can stop a simulation at any time and figure out clearances, take measurements and verify what’s actually possible.”

The 3DEXPERIENCE platform on cloud enabled all stakeholders to visualize the interior and exterior of the Brock Commons – Tallwood House in real-time solving a common industry problem of waste and conflict due to inconsistent data.

A CONSTRUCTION MODEL FOR THE FUTURE

Through the use of prefabricated materials, collaborative processes and advance problem-solving, Tallwood House met an ambitious 9.5-week construction schedule of approximately two floors per week, and roughly 3 months ahead of schedule. Since it was the first building of its kind, Glatt believes the time and cost savings will magnify in subsequent projects as the industry gains experience with this new way of doing things.

“A building owner wants a project delivered with a high level of quality, on time and on budget,” Glatt said. “By developing an integrated process with the team and using technology in an innovative way, we not only exceeded UBC’s expectations, but advanced what’s possible in the construction industry.”