The development of new materials goes beyond the limits of lithium-ion technology. To recharge a battery first requires production of electricity.

The use of simulations and quantum mechanics can accelerate the development of the next generation of batteries and also sustainable energy production needed for the success of future electric vehicles.

One way to improve energy density and safety is to replace the organic liquid electrolyte and polymer separator with a non-combustible solid electrolyte. Different approaches are in development: polycrystalline metal oxides and sulfides, glass-based metal oxides, polymer electrolytes, gel electrolytes, as well as combinations of two or more of these options. “Batteries are complex material systems,” explains Anderman. “Modeling and simulation can be very useful in discovering new material options and reducing the time and cost of physical prototyping. This is where Dassault Systèmes, through its BIOVIA brand, may have a role to play.” BIOVIA Materials Studio is an integrated suite of tools that helps researchers understand the properties and behavior of materials at nanoscale. Special additives are included, for example, to modify the properties of an electrolyte. Molecular dynamics are applied to model the diffusion of lithium ions in different formulations, which can be directly related to the conductivity of an electrolyte. Electrolyte simulations also allow understanding of why conductivity changes depending on the formulation. Examination of the precise movement of lithium ions reveals the impact of the local environment on diffusivity, which facilitates the definition of design rules for the development of new additives. The modeling tools provided in BIOVIA Materials Studio, therefore, enable engineers to explore a vast range of potential materials, understand their behavior and select the best option. The use of these tools, based on traditional simulations, but also on quantum mechanics, accelerates the development of the next generation of batteries needed for the success of future electric vehicles. The development of new materials goes beyond the limits of lithium-ion technology. To recharge a battery first requires production of electricity. Sustainably producing such energy is a major challenge. The seas and oceans play an increasingly important role in renewable energies. Although the first wind turbines were installed on land, it is at sea that wind turbines can reach their full potential, as offshore winds are stronger and steadier than on land. Originally located in shallow waters, wind farms are increasingly being moved further offshore. Hydro turbines are less mature in terms of technology, and use the power of permanent or tidal currents to harness an equally renewable, but more predictable, energy source. In addition, CATIA and SIMULIA solutions complement the molecular aspect of battery engineering to ensure digital continuity, not only in terms of researching new materials but also researching all systems – from propulsion to the entire range of mobility logistics, including the vehicles themselves.

Tidal currents have been studied for centuries. We know when and how much clean energy we can produce, and the energy is predictable. That’s not the case with solar power at night or when it’s cloudy, or with wind power when it’s nice out and there’s no wind!

Harnessing the power of tidal currents

French startup EEL Energy develops next-generation tidal machine prototypes that could revolutionize the way alternative energy is produced. The company is aptly named: designed without a turbine or propellers, the machines feature a fiberglass or polymer membrane that, like an eel, undulate under the water with the tidal current. Several models are under development in different shapes or adapted to a specific aquatic environment. In the marine version, the power generators are located on the membrane. The river version has a mast that triggers a generator outside the water. Compared with other sources of renewable energy such as wind and solar power, this solution offers greater predictability. EEL Energy is developing and testing its river prototypes in the reservoirs of the Ifremer oceanographic research institute, and its tidal prototypes off the coast of Brest in northwestern France, with the support of Dassault Systèmes. Digital simulation is used to avoid errors, reduce testing costs and optimize design. The membrane is submerged virtually to measure performance, practicality and profitability before it is physically produced. Thousands of variations of virtual prototypes can be tested on a computer in the time it would take to build just one physical prototype.

Different models of membranes are available, ranging in size from 0.8 m for test prototypes to 1.6 m and 2.6 m for small 2-3 kW retail models, and up to 5 m for a 30 kW version developed and tested in late 2018. A 10 m, 100 kW model is being developed for 2020, and after that, possibly a 16 m, 500 kW machine. Admittedly, this is far below the power output of traditional energy generation methods, but the membrane is not meant to compete with tidal turbines, which need stronger and faster currents to operate. However, the solution is perfectly suited to places with weaker currents. Another advantage of EEL Energy’s models is that they respect ecosystems. As they are underwater, there is no visual pollution. Also, tidal turbines take up a lot of space, like a dam, and have the same drawbacks. The membrane, in contrast, does not interfere with the movement of underwater life. “During one of our ocean trials, a dolphin came to play with the membrane,” Franck Sylvain says. “The system is very gentle and not aggressive.” To promote new forms of renewable energy, the production of which is by nature irregular and unpredictable, we need to have better control over its distribution. Stationary batteries can play a key role in stabilizing grid generation and energy distribution. Storing and releasing power as needed, these batteries balance out peaks in supply and demand. 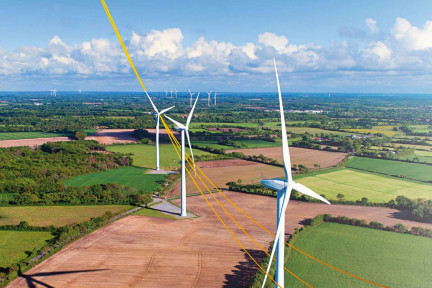