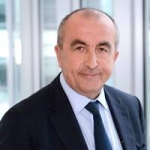 Philippe Forestier is in charge of developing business and promoting the group’s image and visibility by leveraging networks of influencers and executive relationships. Philippe is based at Dassault Systèmes’ global headquarters, DS Campus situated near Paris, France. Philippe also serves as member of the board and Vice-President of the European Software Association (ESA), and of the French Software Association (AFDEL), as well as Advisor to the French Ministry of Foreign Trade (CCEF).

Mr. Forestier is a true company “pioneer” as one of original members of Dassault Systèmes. He joined Dassault Aviation in 1974 in the R&D team in charge of developing CATIA. In 1981, he transferred to newly-created Dassault Systèmes where he continued in R&D. In 1984, he created the Marketing and Technical Support division.

In 1988, he became R&D Director of Industrialization and Customer Support for Dassault Systèmes’ entire product range and, in 1993, became Director of CATIA-CADAM Marketing and Services.

Mr. Forestier was assigned to the United States in 1995 as Vice-President of Americas Market Development. In 1996, he took the additional mission to be the CEO of Dassault Systèmes of America based in California (Woodland Hills).

In 1999, he was appointed Executive Vice-President of Sales and Marketing for small and medium sized businesses (SMB) worldwide and moved back to France in 2001.

In 2003, he became Executive Vice-President in charge of Alliances, Marketing and Communications. In 2007, he was appointed Executive Vice President of the Network Selling sharing his time between the US (Boston, MA) and France.