Dassault Systèmes supports the Monnaie de Paris as it prepares for the future and thus contributes toward creating and safeguarding a heritage that is constantly evolving.

Using the ubiquitous power that 3D technologies enjoy, this new project created by the Dassault Systèmes' Passion for Innovation Institute unveils a preview of the new space for the Monnaie de Paris, the oldest active French institution, following the ambitious project MétaLmorphoses. Thanks to this immersion experience, it is now possible to visit existing, renovated sites and to discover new spaces (Guy Savoy's gourmet restaurant, paths beneath skylights, etc.) It also presents the chance to rediscover the unsung features of the Monnaie de Paris: those historic details which are inaccessible to pedestrians (front-facing statutes), areas which have been traditionally closed to the public (palace building and factory) or restored (Mansart wing).

In addition to this immersion experience, the teams at Dassault Systèmes have created the 3D digital model for the future space. It thereby assists the architects, planners, and decorators in design and development, enabling them to envisage the new place and to experiment with their ideas in situ. The evolutionary digital model aims to enrich itself with new elements as it develops while working with the artist behind MétaLmorphoses. 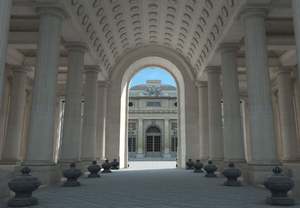 The partnership with the Monnaie de Paris forms a part of the large-scale corporate preservation of heritage that is conducted by the Institute through two thematic collections, "architectural heritage" and "industrial heritage".

Created in 2005, the "architectural heritage" collection has given rise to several revival projects of the heritage of the past, such as Paris 3DSaga. Through a reconstruction of the Parisian heritage from across the ages, the Institute has created a machine to go back in time, from the origins of Lutetia in the Gallic period to the Eiffel Tower at the 1889 World's Fair by way of the Bastille on the eve of the Revolution...

In 2012, a new collection on the theme of "industrial heritage" was initiated with François Schuiten for his comic La Douce, now complemented by the project D-Day, Innovation Day. The Monnaie is responsible for minting circulating coins. It also produces collectible coins, medals, official decorations, and art pieces. Engraving the styles and times into metal, the Monnaie de Paris entrusts the signature of its products to leading artists and fosters a continuous dialogue with contemporary design.

Your senses can genuinely and fully immerse themselves in what will be, in a few months' time, the Monnaie de Paris.