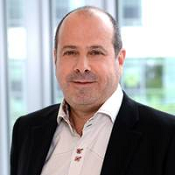 One of the creative forces behind the CATIA brand, Bruno Latchague has made wide-ranging contributions to the design and implementation of new methods for organization, operations and customer relations. Mr. Latchague's work has been a vital component in the Company's technological breakthroughs.

After working in the IT consulting domain and in the automotive industry as a CAD/CAM specialist, Bruno Latchague joined Dassault Systèmes in 1986 as Manager of CATIA Software Infrastructure. In conjunction with commercial development, Mr. Latchague supervised the implementation of CATIA V3 for companies such as Daimler, Honda and IBM. He also launched an expanded portfolio of CATIA applications.

In 1990, as Director of CATIA Products Infrastructure, Mr. Latchague was made head of CATIA brand development. He consolidated structural and human resources for rapid, sustainable growth just as Dassault Systèmes was launching its first digital mock-ups (DMUs). Mr. Latchague expanded this mission to all Dassault Systèmes products in 1995, when he became Executive Vice President of R&D, Architecture and Modeling Technology. In 1999, Mr. Latchague oversaw development of the platform for the launch of the V5 architecture. He persuaded several major companies in the automotive and aviation industries (Chrysler, Daimler, Renault, BMW, Dassault Aviation, Boeing, etc.) to adopt the new Product Lifecycle Management (PLM) solutions.

For many years Mr. Latchague has played an important role in enhancing the business culture and commercial power of Dassault Systèmes, both of which are crucial to the Company's expansion into new countries and sectors.

In 2003, as head of Industry Solutions and then of Services, Mr. Latchague expanded the capacity of Dassault Systèmes to understand and anticipate the technological and production challenges faced by other companies, and helped to adapt the Company's product offers to each sector.

From 2007 to 2010, Mr. Latchague participated in the successful acquisition of IBM PLM, which has allowed Dassault Systèmes to take command of its entire distribution network. He monitored the integration of new teams and took charge of the direct-sales channel (Business Transformation) worldwide, thereby achieving heightened efficiency. From 2011 to 2013, Mr. Latchague headed the Value Solutions channel for indirect sales.

Since 2011, Mr. Latchague has led strategy and operations for the Business Transformation, Value Solutions and Professional channels-the three sales channels of Dassault Systèmes. His mission has been to support the development of 3DEXPERIENCE and help diversify the geographic regions and business sectors of Dassault Systèmes, mainly by fostering cooperation among sales channels, consolidating the Company's partnership ecosystem and forging closer ties with local markets. Mr. Latchague's current mission is to spearhead Dassault Systèmes business development in the Americas, an area primed for growth.